Perfect Fit is an authorized distributor of top manufacturers

Perfect Fit is an authorized distributor of top manufacturers 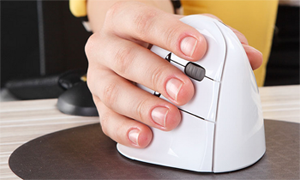 In 1994, a revolutionary ergonomic mouse was invented and patented by Jack Lo due to discomfort he had when using a conventional mouse.

His invention was the first mouse to support a hand in a fully upright handshake position for eliminating the arm twisting required by ordinary mice.

Years of effort in trying to license the invention to several of the largest mouse companies only resulted in rejections. A firm belief in the idea compelled Jack and Ping to exhibit a slightly more developed prototype at Comdex 2001 in Las Vegas. The highly enthusiastic public response encouraged him to manufacture and distribute the mouse himself.Funded only by his own savings, Jack had to do everything himself, including creating the industrial design, package design, web site, brochures, ads, etc.

He went to Asia and found a contract manufacturer to produce the mouse. Many months of collaborative work with the factory culminated in the release of the first Evoluent Vertical Mouse in late 2002. After product introduction, Jack handled PR, sales and tech support while Ping processed and shipped the orders. The VerticalMouse received many raving press reviews and took the Ergonomic world by storm.